Confidence isn’t necessarily what you think it is.

Your ideas about what it’s supposed to look like can prevent you from experiencing it for yourself. 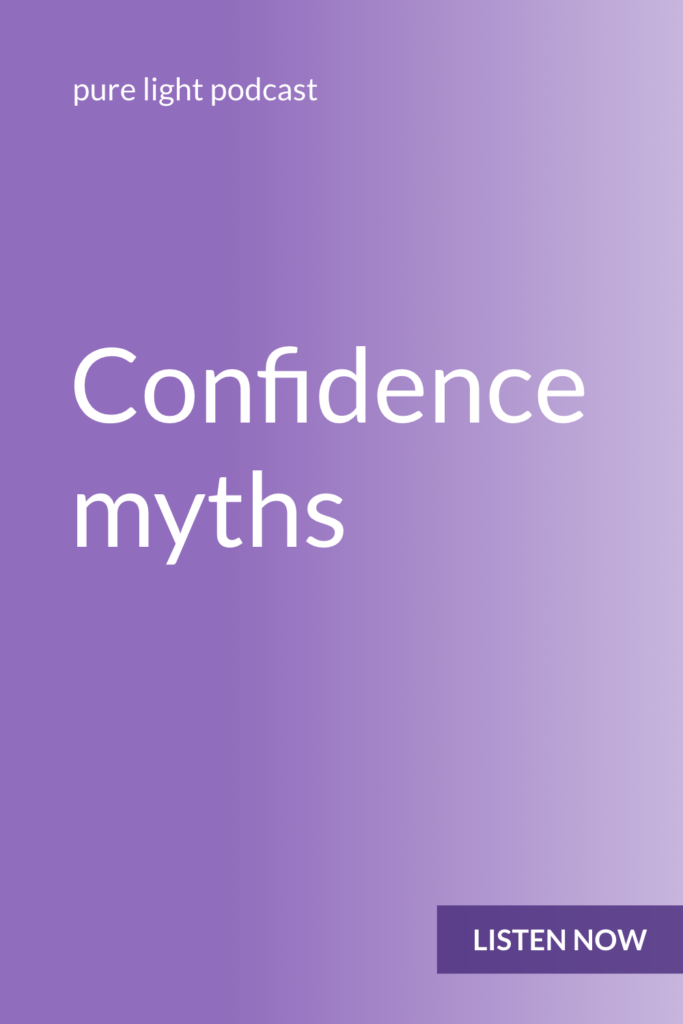 Aili Kuutan: Hello and welcome to pure light. My name is Aili and this is episode 4. This episode is about confidence. My goal by the end of this episode is to help you feel more confident, even if it's something you've been struggling with.

Aili Kuutan: I was at brunch with a friend a couple of weeks ago when we somehow got to talking about confidence, and she said to me, "Confidence doesn't seem like it's an issue for you." And I hadn't really thought about it in awhile, but that made me stop and reflect on it. And I said, "Yeah, I would say that that's true now, but it was the complete opposite a number of years ago..." And I think that it was the complete opposite because of some of the assumptions that I had about what confidence was supposed to look like.

Aili Kuutan: Take a moment right now and imagine what confidence looks like. See what comes to mind and try to get a clear picture of it. So imagine someone showing up with confidence. Ask yourself: What does that person look like? What is the setting? How do you imagine that person speaking and behaving? And hold that for a moment.

Aili Kuutan: I want to share an experience with you from when I was a full-time management consultant. At that point in my life, I visibly lacked confidence, which was a huge problem because I wanted to move up the ladder as quickly as possible. I was asked to do a presentation at a community meeting (which was basically like a department meeting, so there would be 100 or 120 people there). This was immediately after I had just failed a promotion and I was a workaholic at that point in time. When I failed the promotion, it felt like my life was over (and I was in shock because everyone told me they supported me) but then the conversation somehow got derailed because of my lack of confidence. There was enough doubt about the firm's ability to put me in front of a client as an executive that they decided to hold me back. So, that brought up a lot of stuff in me, a lot of anger and fear and sadness and thoughts like: maybe I do suck, maybe I'm never gonna make it to the next level, maybe I'm just not confident, maybe I'm just not that kind of person. So this presentation was like a make or break thing for me. It was either I was going to prove that they made the right decision, or I was going to make them question the decision that they had made.

Aili Kuutan: One of the bosses I had at that point in time was very supportive of me and was like, "You're going to rock this presentation," and he also told me, "Everyone fails a promotion at some point if they stick around long enough... It's something that nobody really talks about but it, it's going to happen." That made me feel a lot better about the promotion thing, and I think his confidence in me about doing this presentation in front of this huge group also helped because he kept telling me, "You're going to rock it. Just breathe, you'll be fine." And so even though I debated trying to get out of during this presentation, I ended up deciding to do it.

Aili Kuutan: I was completely terrified. My heart was pounding. I was just trying to breathe and stand up straight and keep talking and say whatever I needed to say. And luckily people laughed. People seem to enjoy the presentation and I felt like it went pretty well.

Aili Kuutan: After the presentation – after this presentation that was either going to make or break my career – I asked one of the partners for feedback because I was like, "Listen, I need to get this promotion next year. What do I need to do differently?" And he was like, "Nothing." And I remember being like, "No, really, I need some feedback." And he was like, "You were great!" And so in this span of just a couple of weeks, I changed from someone who visibly lacked confidence to someone who could stand in front of a room of 100 people and not only be okay, but actually be engaging and entertaining.

Aili Kuutan: I want to dig into this a little bit deeper here. So what really changed here? I think the biggest thing that changed was my belief about what was possible for me. I decided that there were no other options because I really wanted that promotion the next year, so this presentation was going to have to go well no matter what. That was really the biggest thing that changed. And also, I kept reminding myself to breathe and I think that helped a lot too.

Aili Kuutan: So I want you to go back to what you imagined earlier and think about: How are you different than the person that you imagined? This will help you see not only what you think confidence is supposed to look like, but also how you've eliminated that possibility for yourself because it doesn't look like you.

Aili Kuutan: Confidence isn't necessarily what you think it is. Your beliefs about what it's supposed to look like can prevent you from experiencing it, so uncovering your unconscious beliefs about confidence can actually help you be more confident because you can see the mental blocks that you've had around it.

Aili Kuutan: It's important to keep in mind that true confidence doesn't come from trying to be something that you're not. It comes from aligning with who you really are and showing up in that way fully, whatever that looks like. There isn't a single expression of confidence. It can be loud or quiet. It can be extroverted or introverted. It's going to look different from person to person and from situation to situation, so it's not going to be the same thing all the time

Aili Kuutan: Another thing that's important to point out here is that it's also not like a default setting. This was a belief that I also had that it's kind of like a checkbox, like yes or no, you either have it or you don't... Because it is something that you can cultivate no matter who you are.

Aili Kuutan: Confidence doesn't have to look like whatever you think it's supposed to look like. It can actually look like you. The next time you're in a situation where you're lacking confidence, do this exercise again. Imagine what confidence would look like in that situation and then ask yourself: How is this different than me? See what comes up because that'll ultimately help you see what beliefs you have about confidence and how they conflict with who you think you are. And if you want to share anything about what you've discovered from this exercise, use the Hashtag pure light podcast to join the conversation.

Aili Kuutan: Thanks so much for listening. Until next time, may you be guided by your light.

Scroll back to top

Get new episodes by email

Enter your name and email address below and I'll send you periodic updates about the podcast.

powered by
Love this? Help other people find it:
← Episode 3: The compulsion to compare
Episode 5: “I can’t do that. I’m not that kind of person.” →